The reality of being a student, according to students

What’s it like being a university student in 2019? We went straight to the source to find out students’ views on finance, housing and much more

This is what they told us as part of our annual student survey...

Why students chose to go to university

When applying to university, improving job prospects was the key motivation for almost half of students surveyed. That said, this dropped off for students once they reached their third year of uni.

Presumably, these were students who weren’t quite sure what they wanted to do career-wise but felt that university would benefit them regardless (once they figured this 'end goal' out).

A similar percentage of students (45%) told us that they went to university to pursue a specific vocation or career.

Post-uni ambitions weren't at the forefront for all prospective students, though. For instance, four in ten students wanted to learn more about their chosen subject, while just under a third said they wanted to challenge themselves intellectually.

There was also a sense of university being a natural progression or ‘the done thing’ at that stage, with 30% of respondents saying they felt this.

Search for a course to see what you'll study, what graduates went on to do and more.


Degree apprenticeships – are they on students’ radar?

Degree apprenticeships combine university learning with practical (paid) employment in an actual company or organisation, resulting in a full degree at the end.

While you may have heard about degree apprenticeships from your teachers, careers advisers or in the news, just a quarter applied for one (or considered doing so). Meanwhile, 5% actually applied for both routes.

Six in ten who didn’t apply nor consider it said it was because they wanted to go to university, while a third said there were no such opportunities in their chosen area (particularly those studying subjects such as medicine and dentistry), or they received little or no information about them.

Where students live and what they spend on rent

University halls were the most popular housing type among students: 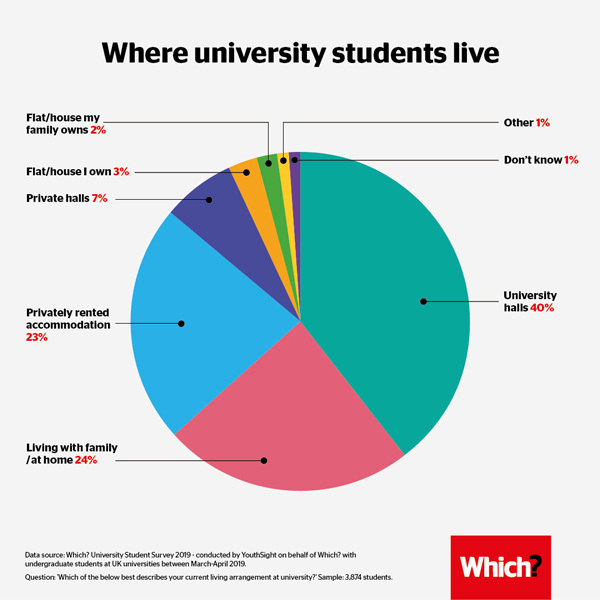 Students in Scotland were more likely to live at home (41%) compared to those in England (25%), Wales and Northern Ireland (both 23%).

This was generally consistent with the previous year, although living at home has become slightly more popular than renting private accommodation. Check out your student housing options here.

Accommodation usually takes the biggest bite out of students’ budget. If you want a rough idea of what you could spend on rent, a little under a third of students living in private accommodation said theirs was less than £400 each month:

That said, what you'll pay will vary depending on where you are in the country, while most cities or towns have their own pricey and cheap areas. If you're deciding where to go in the country for uni, take a look at our guide to picking the right city.

It's always important to check your letting contract carefully so you know exactly what’s included in your rent. In fact, students told us about some of the handy extras that were included in their private housing contract:

These can save you money, as well as time and hassle (in terms of finding suppliers, setting up accounts, paying bills etc).

Anecdotally, it’s usually more common for a landlord to throw in such extras than a letting agent. Students were also slightly less likely to have an issue with their landlord (11%) compared to their letting agent (13%), although just under 10% said they had issues with both.

How students fund university and their studies

Check out our full guide to the reality of student finance to see what students told us about their experience applying for extra funding, living costs at uni, student loans and more.


What students struggle with most at university

University is traditionally seen as a bustling social hub, with thousands of students coming together from across the country (and even world) and an assortment of clubs and activities to get involved in on campus (which are often located in big, highly populated cities).

So it’s surprising to see that loneliness was the most common struggle reported by students, with over half admitting that they dealt with this at some point during university:

Meanwhile, almost half of students struggled with their course (49%) and finances (45%). Around a third reported having difficulties with making friends (33%) and maintaining relationships (30%).

Female students were more likely to admit to having struggled with any of the issues we asked about above.

In many cases, students dealt with these alone. Across all the issues reported, more than four in ten said they didn’t seek help from an appropriate source of support (such as a personal tutor, GP, uni counselling centre etc).

On a positive note, nearly seven in ten who did seek help from their university were seen within two weeks. In fact, 24% said they saw someone immediately, and 23% had to wait a week.

Six in ten said they were satisfied with the support they got.

Nationwide and Santander were rated top for student bank accounts, in our analysis.

Despite student accounts having a variety of incentives and benefits for students, we were surprised to see that nearly a third of students didn't have one.

When pressed as to why they didn't have a student account, a quarter said they didn't want the overdraft as it would encourage them to spend money. Some 19% said they were worried about paying back their overdraft.

Of those who did have a student bank account, more than half made their choice of bank based on the freebies and incentives that came with the account. Four in ten stuck with the bank they were already with, while more than a quarter went for the best overdraft.


Data source: Which? University Student Survey, conducted by YouthSight on behalf of Which?, surveying 3,874 students between 20 March 2019 and 12 April 2019. See specific graphs for details.